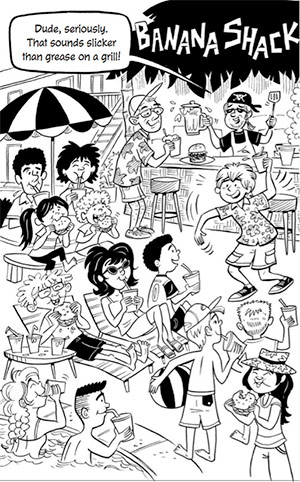 1. FACT! The tallest sandcastle was built by Ted Seibert and a crew of 19 on Virginia Key Beach, Miami, Florida. It was 45 feet and 10.25 inches tall. Talk about a tall order of sand!

2. FACT! Some documents show that the art of sandcastle building began as early as the 16th century. Others believe that building sandcastles dates all the way back to ancient Egyptian times since they used sand models to build their pyramids. So basically we’ve been getting sand in our shorts for hundreds of years.

3. FICTION! Joey Chestnut did set a record, but it was for eating 70 hotdogs in only ten minutes! He also won a title at the United States Chicken Wing Eating Championships in Buffalo, New York by eating 188 wings in 12 minutes! There’s nothing this guy can’t stomach!

4. FACT! Philip McCor made this sculpture in hopes of making some quick cash off it.

5. FACT! Back then, women had to swim in jackets, petticoats, and hats! You really had to suit up if you wanted to swim! It wasn’t until the 1920s that swimsuits started to look like what are worn now at the beach.

6. FACT! Myrtle Beach is famous for being chock full of free food opportunities… if you’ve got the belly of the beast! From eating an 80 ounce steak in an hour to scarfing down a 30-inch pizza, Myrtle Beach has you covered when it comes to the ultimate food challenges.

7. FACT! Beaches come in many shades! The color of a beach depends on what it’s made of.

8. FACT! There’s no better way to show how much you love America than by stuffing your face with a ridiculous amount of food!

9. FICTION! Seagulls have glands near their eyes that drip the salt from the salt water back into the ocean. They’re pretty much water filters with wings! Talk about having your eyes on the prize!

10. FACT! In 1936 Milton Blake, an Australian chemist, created the first sunburn cream in his kitchen. L’Oreal cosmetics sold the cream under their brand. But it wasn’t like the sunscreen we have today! It was uncomfortable, thick and felt like you were wearing a coat of paint! Yuck!