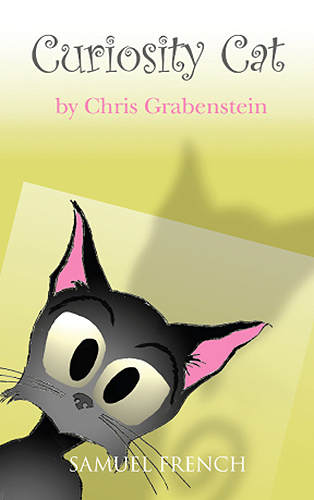 A play by Chris Grabenstein

Chris has written the play about Claire and Charlie and the extremely curious cat that turns their lives upside down that’s being rehearsed in The Demons’ Door.

The world premiere of Curiosity Cat took place at The Children’s Theatre of Knoxville, Tennessee in 2010 and now the play is available for production everywhere through the world-renowned play publishers Samuel French.

You can order a copy of the Script here:

More about the play from the Samuel French catalog

“To my way of thinking, there are no such things as strays;
only those who have not yet found their homes.”

When their mother becomes very ill Claire and Charlie are forced to live with their father’s Aunt Jenny. A stray cat named Curiosity also wanders into the house. When he breaks Claire’s prized music box, she immediately throws him back out into the streets. Being homeless is an adventure, not a concern, for a cat this curious and cool. Soon, the children (with Fred the dog) set out to rescue Curiosity Cat who is busily trying to help other forlorn felines find homes while simultaneously avoiding a newly appointed “cat catcher” who vows to put him to sleep!

Filled with memorable characters—such as Coot, the geriatric cat; Slicker the big city alley cat; Penelope, the pampered Persian Princess; Fred the extremely loyal dog; a nervous and nutty squirrel; a chorus of cute jailbird strays; and the evil cat catcher Skeevelberger—the play builds to a funny and touching climax that will leave audiences laughing and cheering! 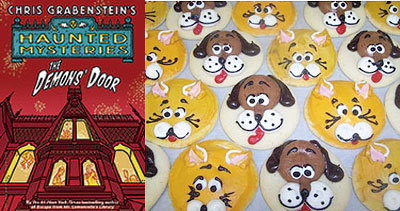 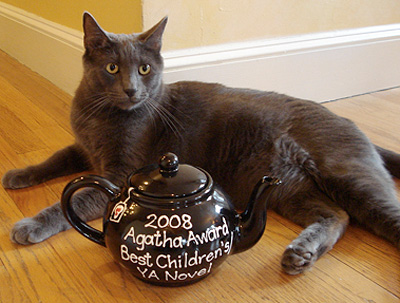 Identify a rescue or shelter in your area and donate the profits from your production. You could also reduce the cost of admission when patrons bring an item to donate from the organization’s wish list.

Have a Book And Bake sale for The Drama Club!

Schools can get copies of The Demons’ Door—the book about a haunted production of Curiosity Cat—at a 40% discount. Bake up batches of dog and cat sugar cookies and raise funds for your next production.

Help a stray find its home!

Invite local animal rescue groups to bring adoptable cats and (quiet) dogs to the lobby before and after the show. Because there are no such things as strays, there are only those who have not yet found their home!

“Hi Mr. Grabenstein!
I am the director of Curiosity Cat here at the Schultz Theatre in New Market, VA.
You asked if the kids were enjoying the play. To that question, I can respond with a resounding, “Yes!” At our first read-through we only made it through half the play in a two hour rehearsal, because we were laughing so hard that at times we couldn’t breath! For my own part, I have been telling everyone that this is the funniest children’s play I have ever encountered. I absolutely love it! I love animals and am passionate about animal rescue.
Anyway, I want to thank you from the bottom of my heart for writing this play. It is fun and heartwarming. Thank you also for considering coming to see my little band of actors. They are awesome kids, and totally in love with your characters!
Thank you again!”
—Yvonne Owens, Director of Youth Theatre, The Schultz Theatre, New Market, VA

“Curiosity Cat had my daughter rolling in the floor with laughter! Well done!”
—Jeanne White

“I must say that I was blown away by how well-written the play is. My husband said it is like a Disney movie…so funny for kids and yet really entertaining for adults, too.”
—Amie Headrick Dyer 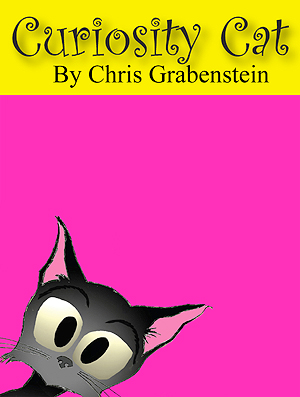