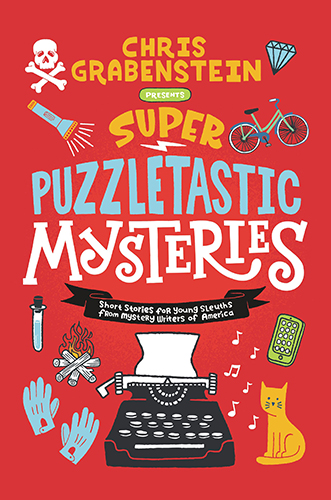 Short Stories for Young Sleuths from Mystery Writers of America

AMAZON Best Books of the month!

Bestselling author Chris Grabenstein and the Mystery Writers of America bring together twenty peerless puzzles—from bestselling authors such as Peter Lerangis, Stuart Gibbs, Lauren Magaziner, Kate Milford, and, of course, Grabenstein himself—in an anthology of mystery short stories that invite readers to try to unravel the riddles themselves.

From tales of hapless superheroes and stolen squirrel monkeys to murderous triplets and haunted basements, these thrilling, puzzling, and hilarious cases have one thing in common—YOU get a chance to be the detective before the author reveals the solution.

With twenty-never-before-published mystery stories, this collection will leave young detectives sleuthing for more!

“Each story is short enough to make for a fun classroom read-aloud, presumably followed by a collaborative attempt to solve the mystery. VERDICT: An engaging addition to a school library collection, especially one where middle grade mysteries, puzzles, and mind teasers are in high demand.”
—School Library Journal

“In the spirit of Donald Sobol, creator of Encyclopedia Brown, 20 writers for young people offer short mysteries for budding sleuths to tackle…solutions in the back.

The MacGuffins range from the usual suspects (missing artworks, fundraising proceeds, and valuable jewelry) to more-unusual engines of mystery, such as whether a supposed ghost is real or not and who stomped out the giant letters “F-A-R-T” in the snow.

In each case, one kid or a small group winkles out clues, identifies suspects, and then gathers for a denouement. None of these entries are no-brainers, being either chock full of red herrings, fiendishly tricky, or reliant on coded messages or, for that ‘ghost,’ a knowledge of atmospheric physics. Kate Milford’s locked-room–style camp tale will require some serious thinking outside the box while Steve Hockensmith’s ‘Possum Man and Janet,’ in which a fifth grader reluctantly accompanies her truly dim-bulb superhero uncle on a caper, is one of several entries that are entertaining even without the requisite deductive wizardry.

Readers can check their own solutions at the end, where the contributors have laid out all the clues and reasoning… Tasty challenges for preteen Poirots, middle-grade Miss Marples, and ‘Jigsaw Jones’ grads.”
—Kirkus